By public bus it takes between 10 and 12 hours to travel from Khon Kaen depending upon which bus service you use. You can also fly from Khon Kaen to Chiang Mai which takes slightly over an hour but is on average three times more expensive than travelling by bus.

There are currently 6 direct bus services a day from Khon Kaen to Chiang Mai available to book online.

Use the Search Box below to buy bus tickets from Khon Kaen to Chiang Mai.

Flights from Khon Kaen to Chiang Mai are also available to book through the Search Box. 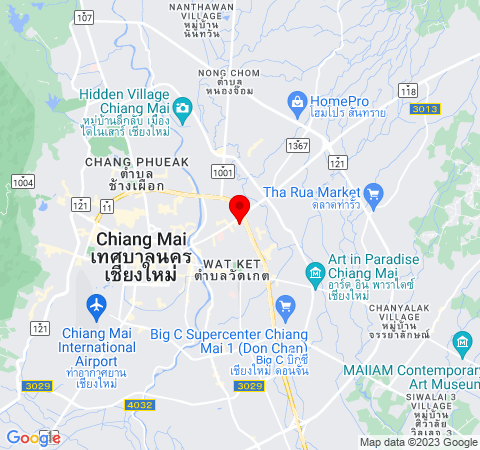 Wat Lok Moli, located near to the north section of the moat that surrounds Chiang Mai’s old city, dates back to the 14th Century. As well as being very old, this temple is worth visiting because of its large chedi. A chedi is a type of tower which has a semi-hemispherical base and pointed structure on top. In Thai Buddhist temples chedi typically contain religious relics although records of the exact nature of the religious relics in the chedi at Wat Lok Moli have been lost, as have records of the exact date that the temple was founded.

The original temple, presumably built out of wood, has perished. The oldest part of the temple, as it stands today, is the massive chedi which was completed in 1527. The main temple building, which stands in front is the chedi, was built in 2003 in the same location as the previous incarnations of this temple build. The 2003 structure has been constructed largely out of wood using traditional methods and in a design common to temples constructed during the Lanna, when Chiang Mai was made of a separate kingdom in the North of Thailand. Wat Lok Moli is open daily from 06:00 to 17:00, admission is free, and its well worth visiting during your stay in Chiang Mai.

Next find out Bus times from Luang Prabang to Chiang Mai