There are three ways to get from Phuket to Bangkok:

Bus Times from Phuket to Bangkok

The cheapest way to travel from Phuket to Bangkok is by bus. The expensive part of the journey by air is the taxi ride to the Airport which will cost around 400 THB from Phuket Town and around 600 THB from Kata or Karon beaches, with a 100 THB airport surcharge added on top. By contrast bus services to Bangkok depart from Phuket Bus Terminal 2, which is easy and cheap to reach.

Buy Tickets from Phuket to Bangkok

Use the Search Box below to find your tickets to travel from Phuket to Bangkok:

There are two arrival points in Bangkok for bus services from Phuket: Morchit Bus Station and the Southern Bus Terminal. If you plan to travel into Bangkok city centre or toward another city in the north of Thailand, such as Chiang Mai or Ayutthaya you may find it more convenient to take the bus which goes to Morchit Bus Station.

Bangkok’s Southern Bus Terminal is located on the other side of the river to main areas where visitors to the City prefer to stay. From Sai Tai Mai you cannot connect directly to the train or metro service. You options are to take a bus (a very slow option), take a taxi all the way to your hotel, or take a taxi to Bang Wa BTS station and from there travel onward by the BTS (skytrain). Please note that if you are going to the Khao San Road area the skytrain doesn’t stop there so you are better simply taking a taxi the whole way.

Location of the Southern Bus Terminal 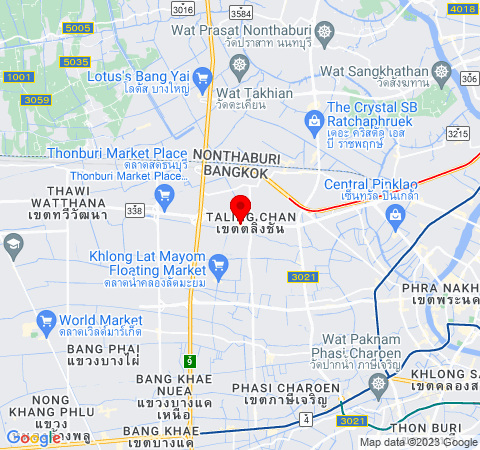 If you want to do the onward journey cheaply only take the taxi as far as Mo Chit BTS (skytrain) station or Chatuchak Park MRT station and then change to public transport. Both stations are about 5 to 10 minutes drive away and it should cost you around 40 THB in a meter taxi. If it is daytime, and you are feeling athletic, you can walk across the parks. Careful though crossing the roads as they have many lanes and the traffic goes fast. At a brisk pace it takes about 20 minutes to do the walk, although on a hot day with bags you will be tired by the time you get there.

Location of the Northern Bus Terminal