There are two routes you can take to travel from Chiang Mai to Mae Sot:

Direct bus services from Chiang Mai to Mae Sot are operated by the Green Bus Company. 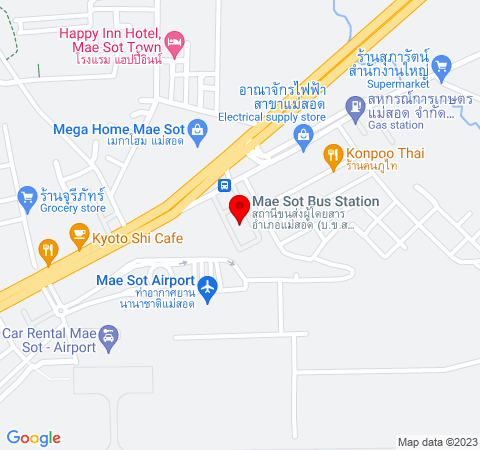 Use the Search Box below to buy your tickets from Chiang Mai to Mae Sot.

Travel by train via Phitsanulok

The closest train station to Mae Sot is Phitsanulok, which is on the Northern Train Line running from Bangkok to Chiang Mai. Travelling by train via Phitsanulok is a longer journey overall and you still end up travelling by bus, although the amount of time you need to spend on the bus is around 90 to 110 minutes less than taking a bus the whole way.

There are 6 direct trains services a day from Chiang Mai to Phitsanulok.

Stage 2: By road to Mae Sot

The next stage of the journey is by bus or minivan from Phitsanulok to Mae Sot.

About Travel to Mae Sot

Mae Sot is a border town with an interesting mix of ethnic groups, many of whom are in Mae Sot having fled from Myanmar. Estimates of the number of refugees from Myanmar now living in the Mae Sot area range from 100,00 to 200,000 and comprise mostly people from minority ethnic groups such as the Karen and the Hmong. This diversity of ethnic groups gives Mae Sot a unique vibrancy and it attracts a lot of foreign visitors ranging from sightseers to people working for organisations offering support to these stateless refugees which are hosted by Thailand but recognised as being permanent residents of Thailand with rights to access public services in the same way at Thai nationals.

Mae Sot is a transport hub: