Originally launched in 2018, the Phadung Krungkasem Canal Boat Service is the newest of Bangkok’s canal boat services and is yet to become popular with Bangkok residents and tourists as means of transport around the city. This service has, as a consequence, been provided free of charge since it started although there are plans to introduce a fee to passengers sometime in 2021, with a amounts such as 5 or 10 THB being suggested as the fare when charging does commence. In essence this service is an attempt to stimulate tourism in some lesser visited parts of the city not currently connected to Bangkok’s ultra modern rapid elevated light railway system, the BTS, or its metro system, the MRT. For this reason the service should at some point become successful because it reaches parts of Bangkok that you can only currently get to by the city’s congested road network.

In November 2020 the Phadung Krungkasem Canal Boat Service became Bangkok’s most environmentally friendly public transport system with the original diesel engine boats were swapped for all electric fibre glass boats partly powered by solar cells on the roof. For users this has the added advantage of making the boats much quieter and therefore more enjoyable to ride.

The Phadung Krungkasem Canal Boat Service travels at a leisurely pace of 10 to 15 kph which means it takes around 30 minutes to travel the 5 km route which connects 11 piers. Notable piers include Nakhon Sawan Pier near Wat Benchamabophit, otherwise known as the marble temple, and Thewes Market Pier which is near Wat Intarawiharn, a temple best known for housing the city’s only large standing statue of the Lord Buddha. The service currently runs everyday from 06:00 to 19:00 with departures scheduled every 15 minutes.

Location of the First Pier on the Phadung Krungkasem Canal 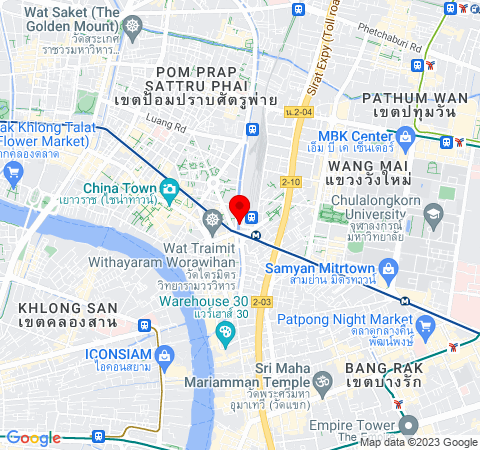 Location of the Last Pier on the Phadung Krungkasem Canal