Satun Bus Station is a small bus station in the far south western corner of Thailand 977 km by road from Bangkok.

Satun Bus Station is the public transport hub for connections to and from the ferry ports in Satun Province, which has little tourism other than in the established resort islands off the coast of Western Thailand.

The majority of the services operating out of Satun Bus Station are minivan services to destinations in Southern Thailand.

There are a few big bus services operating on long distance routes from Satun Bus Station. The main route is to Bangkok, with less frequent bus services travelling direct to Phuket, Trang and Krabi. For other destinations the best option is to take a minivan to Hat Yai Bus Station which is the major bus station in the region with direct services to towns across Southern Thailand as well as to major towns and cities in Malaysia.

There are two destinations where most foreign travellers passing through Satun Bus Station will be headed towards:

There are two ways to reach both of piers from Satun Bus Station, with the faster option being the more expensive. 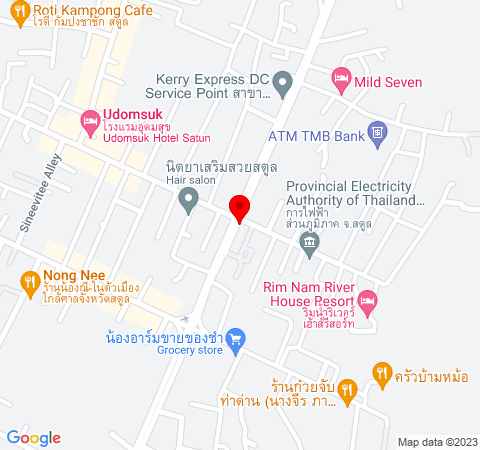 There are very few amenities at Satun Bus Station or close by as the bus station is on side road some distance from the town centre.

Facilities at Satun Bus Station include:

The ticket offices at Satun Bus Station are at the front of the station as you enter the terminal building. There are different ticket counters for each service providers. Several ticket counters sell bus tickets to Bangkok.

One major annoyance at Satun Bus Station is an English speaking Thai lady who will attempt to misdirect to an overpriced bus service as you enter the station, particularly if you are a foreigner. She is very persistent and will lie to you about the timing and cost of the next available departure to get you to buy a ticket through her. Politely refuse her assistance – she is a ticket tout and does work at the station – and deal directly with the people at the ticket counters.

Use the Search Box below to buy travel tickets from Satun Bus Station to Bangkok:

Change for the destination in the Search Box to find tickets to other places in Thailand.

There are five daily bus services from Satun Bus Station to Bangkok which you can book online. The final stop for these services is Bangkok Southern Bus Terminal.

Minivan services to Hat Yai depart from Satun Bus Station approximately once an hour, when they are full, from around 06:00 until 17:00. The fare is 50 THB, although you may be charged more.

Minivan services to Trang depart from Satun Bus Station approximately once every two hours, when they are full, from around 06:00 until 17:00. The fare is around 100 THB.

Bus to Krabi and Phuket

Local bus services depart from Satun Bus Station travelling to Phuket via Phang Nga and Krabi approximately every 2 hours from 07:00 until 20:00. The fares vary depending upon which service you take. Expect to pay around 350 THB to travel to Phuket.