Out of 24 official Bond films, and one unofficial one, 2 have been filmed on location in Thailand. In The Man with the Gold Gun (1974) much of the story is set in various locations in Thailand. In Tomorrow Never Dies (1997) the story line relates to Vietnam, but because of the restrictions imposed by the communist Government, it was filmed in locations in Thailand instead. James Bond seems to leave 23 years between visits, and by our reckoning that makes him due for a return to Thailand in 2020 for the next instalment of the the 007 franchise after Spectre (2015).

Back in 1974 Thailand not many tourists were going to Thailand. Lots of off duty soldier had stayed there whilst they weren’t fighting in Vietnam and Laos (don’t tell anyone about this as the US Government is still keeping this a secret) but by 1974 most had gone back home. This left Bangkok with a problem, lots of hotel space and no one to stay. The decision to film this particular instalment of Ian Fleming’s tales of the British secret agent was therefore well timed for Bangkok’s hoteliers and they owe a big thank you to the film’s producer Cubby Broccoli. Until The Beach (2000) no other film did more to bring tourists to Thailand. The commercial power of the Bond franchise rivals the influence of the shadowy Spectre in every sense. 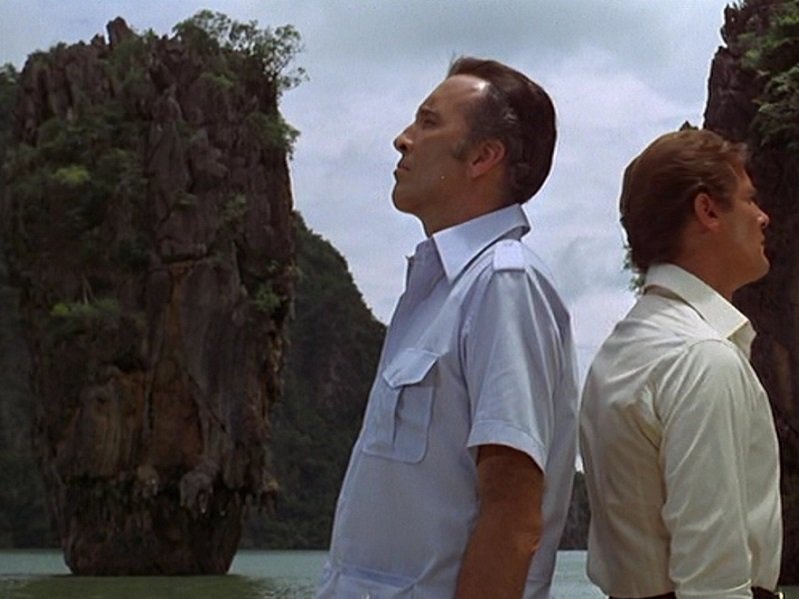 In the film Scaramanga’s island lair is called ‘Nail island’ and it is meant to be located somewhere in the South China sea, a reward from a fictional Chinese leader for disposing of high profile critics of the regime with his famous golden gun. In fact the famous island from which the large (and distinctly phallic) solar panels emerge is Koh Tapu and Scaramanga’s house in on Koh Khao Ping Kan island, both in Phang Nga Bay. Its a major tourist attraction. You can’t go to the actual island, but you can stand on the beach of another island and get your photograph taken in front of Koh Tapu. If you are travelling there independently first go to Phang Nga Town and get a bus to the ferry pier. It is a half day trip to see the islands and you can combine it with kayaking around the limestone islands in the bay. 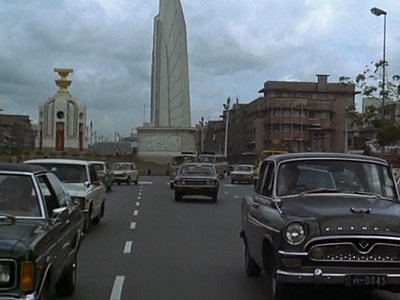 Remember the car chase where Bond goes in hot pursuit of Miss Goodnight (played by Britt Ekland) with Sheriff J.W Pepper in the car, who also appeared in the earlier Live and Let Die (1973). Yes, well that is set in the Phra Nakorn district of central Bangkok. This is near Khao San Road, a popular tourist centre walking distance from Democracy Monument and the Giant Swing, which both feature as back drops in the car chase. If you really want to get into the spirit of the film ask a tuk-tuk drive to follow another car around town and tell the tuk-tuk drive (as Bond did to Sheriff J.W Pepper in the film) that they are ‘commies’ .

Location of the Car Chase in Phra Nakorn

James Bond at the Karate School (Muang Boran near Bangkok) 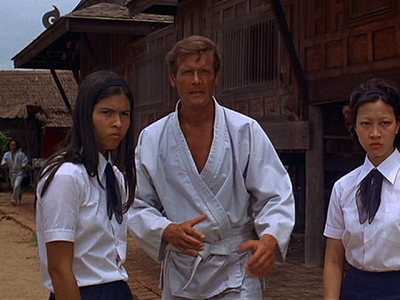 This scene was filmed at a museum complex about 20 km outside Bangkok in Samut Prakarn. To get there take a tour or taxi from central Bangkok or stay in Samut Prakarn. Muang Boran is interesting in its own right and you can go into courtyard where the sparring session took place.

Location of the Karate School at Muang Boran

Less of an iconic film than the Man with the Golden Gun for sure, and the story is meant to be set in Vietnam. However, it does has some good stunts in it (most filmed in Bangkok) and if you are planning to ‘tick off’ Bond locations around Thailand you can’t really ignore this one, even if a lot of the movie going public did. 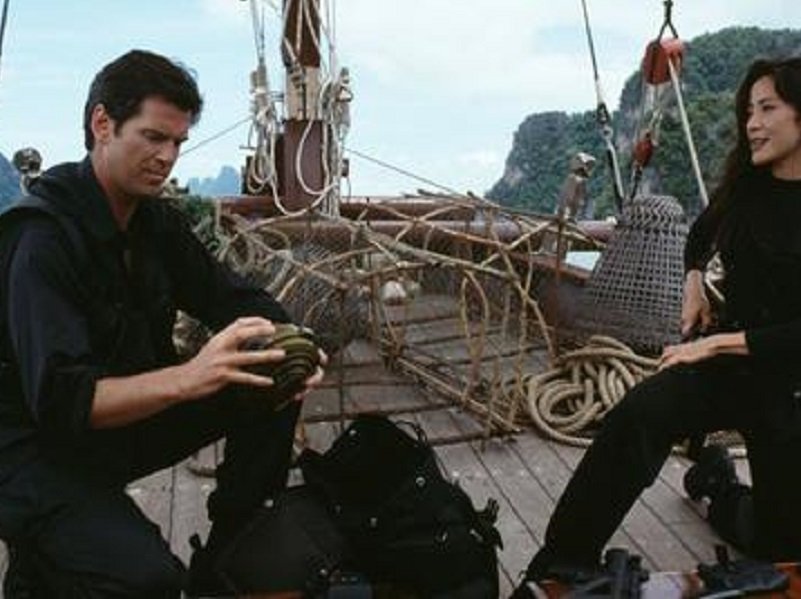 Michelle Yeoh looks very different in this film to Crouching Tiger, Hidden Dragon (2000). It was only filmed three years later but she looks about 20 years older. Phang Nga Bay is a good substitute for Ha Long Bay as the geography is similar. If you are coming to visit, perhaps to stay in Phuket, you can do it in a day trip. We suspect the geographical similarities were not the only reason they decided to film here. Nearby Patong Beach in Phuket would have been a lot of fun for male film crew members working away from home. A bit down market for James Bond perhaps, but he does have a background in the Royal Navy and we all know about drunken sailors. 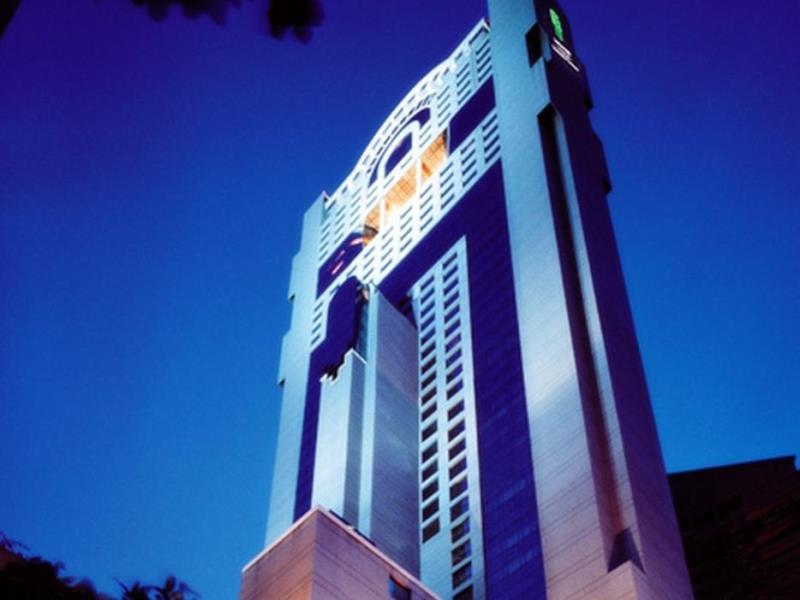 For me the ‘Banner Stunt’ has to be one of the best in any Bond movie. In the film he escapes from the top of a tall building in Saigon, or Ho Chi Minh City as it is presented called, by sliding down a massive banner. The main tower of the Banyan Tree Bangkok Hotel, where it was filmed, is terrifyingly high and fair play to the stunt men and women who did this one. It’s vertigo central, and that is also the name of the famous restaurant on top of the hotel (Vertigo). They also have a bar called the Moon Bar which is also outside on the top of this tower next to the famous Vertigo restaurant. The Banyan Tree Bangkok Hotel is a moderately expensive hotel located on the South Sathorn Road in Bangkok. For those of you who did know Bangkok, the South Sathorn Road leads from the Silom area of Bangkok to the river. It is a good location for visitors to Bangkok because the hotel is near both the river, and therefore the important temples and palaces, as well as on the Skytrain (BTS) and Underground (MRT) systems making it easy to move around Bangkok.

Next find out How to buy bus, boat and train tickets in Thailand in advance