Thong Nai Pan Yai is the quieter half of a double bay in the north east corner of Koh Phangan in Southern Thailand. The next door beach is the better known Thong Nai Pan Noi, which has four luxury beachfront resorts that attract high spending tourists from all other the world. By way of contrast Thong Nai Pan Yai has no luxury resorts in the same price range but loads of mid range and budget bungalows. You can walk between the two beaches in about 20 minutes.

Thong Nai Yai has a small village spread out, unattractively, on the road set back about 140 metres from the beach. There are some bars, shops and restaurants along this road and quite a lot of the the local people live there. What attracts tourists to Thong Yai Pan Yai is, however, not this village area but the beach and the resorts built between the road and the beach.

There are lots of beach bungalow resorts with restaurants where you can eat on the beach front, as well as a small number of independent restaurants and bars, none of which are particularly expensive. For day trippers to Thong Nai Pan Yai the most popular option is to park their vehicle at Pen’s Bungalows in the middle of the beach and to enjoy the beach in front of this resort, making use of the restaurant and bar operated by Pen’s Bungalows.

Most of the eateries in Thong Nai Pan Yai are operated by the resorts. Some of these are better than others. There is also a small market area in the village opposite the branch of 7-Eleven. This market is fairly cheap and the stalls are operated by local people and worth supporting to help spread some of the tourist income around amongst smaller business operators instead of giving everything to the big resort owners.

The accommodation in Thong Nai Pan Yai is moderately expensive compared to mainland Thailand, but cheap compared to neighbouring Thong Nai Pan Noi. You can get a basic bungalow near the beach for less than 1,000 THB per night, but you need to pay a bit more for something actually on the beach or a bit more luxurious.

The hotels in Thong Nai Pan Yai include:

There is only one form of public transport in Koh Phangan, which is a shared taxi. The fare from the main port in Thong Sala to Thong Nai Pan Yai in a shared taxi is 300 THB per person. 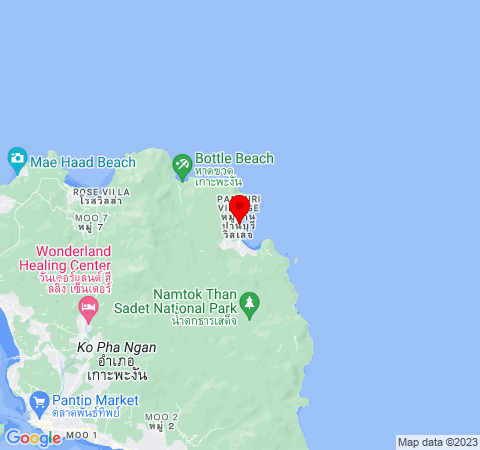