The journey by bus from Chiang Mai to Mae Sai is scheduled to take 5 hours 10 minutes.

There are currently 2 direct bus services a day from Chiang Mai to Mae Sai available to book online.

Use the Search Box below to buy tickets from Chiang Mai to Mae Sai. 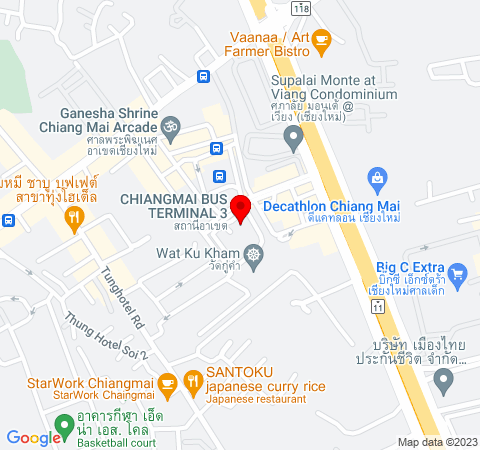 Mae Sai is the most northerly town in Thailand and one of the major crossing points into Myanmar. This is the land crossing to take for the shortest overland route from Thailand to destinations in Northern Myanmar such as Kalaw, Bagan and Mandalay. The other thing which Mae Sai has recently become better known for is Tham Luang Cave, which is 15.6 km by road to the south of Mae Sai town. Tham Luang Cave is part of a limestone cave system that stretches over 10 km. In 2018 a junior football team got caught in the cave by rising water and were rescued 18 day later by an international effort under the constant watch of the world’s media.

Mai Sai itself is a relatively small town of just over 20,000 permanent residents. The town has a small range of most inexpensive guesthouses and hotel, some of which cater to the needs of foreign visitors. The same goes for the town’s bars and restaurants. Mae Sai is an inexpensive place to stay with relatively little upon which to spend much money, except of course for organised tours. Rather than pay for an organised tour you can take a shared taxi from the centre of the town to the famous Golden Triangle park, where two rivers converge to form a natural border between three countries: Thailand, Laos and Myanmar. The main attraction in Mae Sai town itself is Wat Phra That Wai Dao, a Buddhist temple with a Burmese style stupa, a large statue of a scorpion and a monument to King Naresuan, who famously beat the Burmese in battle many times. Installed this close to the border crossing location quite possibly as a warning to neighbouring Myanmar to be respectful of Thailand’s military strength. There is no known historical link between King Naresuan and Mae Sai as far as we are aware.