There are two direct bus services a day from Chiang Rai to Nakhon Ratchasima available to book online.

Use the Search Box below to buy your bus tickets from Chiang Rai to Nakhon Ratchasima. 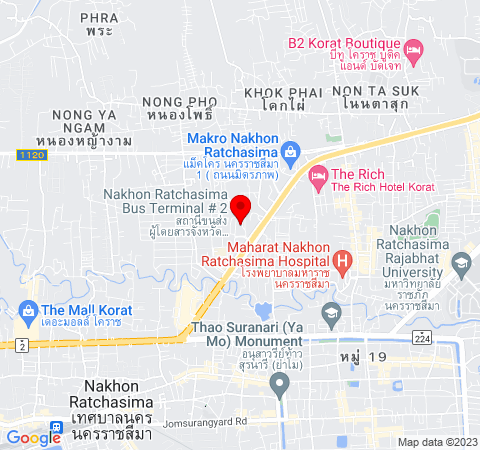 With a city centre population of over 120,000 permanent residents, Nakhon Ratchasima is one of the four large towns in the North Eastern Region of Thailand. Nakhon Ratchasima is not itself a popular tourist destination. The old part of the town centre has two places of interest to visit. The most popular is Suan Rak Park which contains a statue to local folk hero Grandma Mo who, according to legend, led an uprising against a short-lived occupation of the city by an army from Laos. The park also contains some interesting statues dedicated to the city’s famous breed of cat, the Korat Blue. The other place to visit is Wat Pha Narai Maharat. Wat Pha Narai Maharat features a temple on an island in a man made lake which houses two ancient Khmer era sandstone statues.

The most important tourist attraction in the province is the Phimai Historical Park, 60 km away from Nakhon Ratchasima city centre. There are frequent bus services to the historical park from Nakhon Ratchasima Bus Terminal 1. The Phimai Historical Park contains probably the best examples of Khmer architecture in Thailand, dating back to the 11th and 12th Centuries. The main temple covers a rectangular area roughly 1,000 metres by 600 metres. Like the more famous Khmer temples in Siem Reap, the central point of the Phimai Temple is its three towers, the tallest one representing Mount Meru, the home of the gods in Hindu mythology.