By bus the journey from Songkhla to Bangkok is scheduled to take from 12 to 17 hours depending upon which bus service you take.

Bus Times from Songkhla to Bangkok

There are currently 3 direct bus services a day from Songkhla to Bangkok available to book online.

Buy Tickets from Songkhla to Bangkok

Use the Search Box below to buy your trave; tickets from Songkhla to Bangkok: 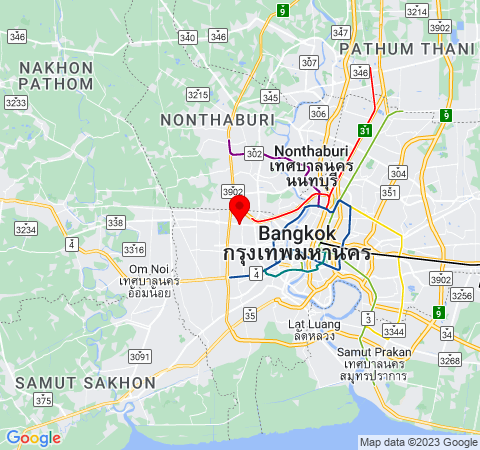 The only way to travel direct by public transport from Songkhla to Bangkok is by bus. If you don’t want to travel by bus then your best alternative option is to travel into Hat Yai where you can board either a train, or fly, to Bangkok. By train the journey time from Hat Yai to Bangkok is 15 to 18 hours depending upon train service you take (some are faster than others) and any delays on the line. The scheduled flight time from Hat Yai to Bangkok is from 1 hour 15 minutes to 1 hour 40 minutes depending which airline you fly with. The cheapest way to get from Songkhla to Hat Yai is to take a minivan. They depart frequently from Songkhla Bus Terminal and take around 40 minutes to reach Hat Yai, terminating at Hat Yai Bus Station.

The arrival point for bus services from Hat Yai to Bangkok is Bangkok Southern Bus Terminal, also known as Sai Tai Mai. This large bus station is located well outside Bangkok city centre and not connected to Bangkok’s excellent overhead suburban railway service (the BTS) nor its metro service (the MRT). For onward travel from Bangkok Southern Bus Terminal you have the option of taking what can be an excruciatingly slow public service into Bangkok, taking meter taxi the whole way into the city centre (150 to 200 THB) or taking a taxi to the nearest BTS or MRT station. The nearest BTS station to Bangkok Southern Bus Terminal is Bang Wa, which is 9 km away and it costs around 100 THB in a meter taxi to get there. Following an expansion of the MRT network in 2020 there is also now a much closer MRT station (Bang Yi Khan) which is only 2.7 km from Bangkok Southern Bus Terminal. For China Town and the Sukhumvit Road taking the MRT service is the quickest option. For most other locations in Bangkok it’s generally quicker to travel to Bang Wa BTS and continue your journey via the BTS.