There are three daily bus services from Udon Thani to Sakon Nakhon which you can book online.

Use the Search Box below to book your tickets from Udon Thani to Sakon Nakhon.

Children under the age of 3 travel for free if they share a seat with an adult. 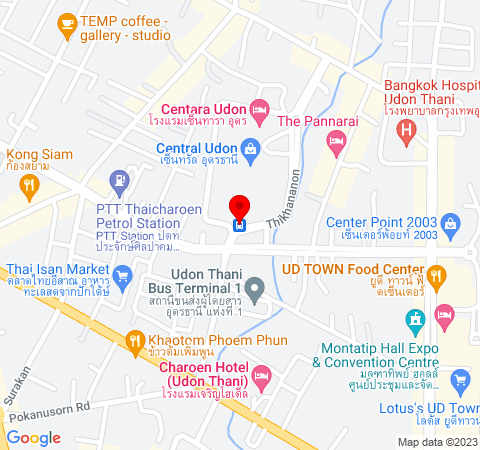 Sakon Nakhon is located in the north-east of Thailand 110 km away from the Thai/Loatian border at Mukdahan where you can cross a bridge to the city of Savannakhet  in Laos. The influence of Laos on this part of Thailand is evident in the locally spoken dialect of Thai, the food and the culture. There are two main things which Sakon Nakhon is known for. One of these things is Nong Han Lake, on the banks of which Sakon Nakhon city is situated. Nong Han Lake is vast lake with a surface area of over 125 squares kilometres and in large parts covered with red lotus flowers, which have an attractive red flower sitting above the water line supporting by a large lily pad. It is not advisable to swim in the lake because it is infested with parasites, but many Thai tourists travel here to see the red lotus flowers and take boat tours to an island in the centre of the lake which has a temple built upon it.

The other thing Sakon Nakhon is famous for is its temples. There are lots of them. The largest and most visit temple is Wat Phra That Choeng Chum, which is located in the centre of Sakon Nakhon 1.9 km away from the bus and coach station. This large temple complex dates back to the 10th Century with more modern parts of the temple built on the same site as an older Khmer temple, part of which are still in existence today including a distinctive Khmer Prang (a prang is a type of pointed tower which formed the centre piece of Khmer temple and a fore-runner of the chedi which features in Thai era temples). The main feature of Wat Phra That Choeng Chum temple is its large white and gold chedi. The temple is believed by Buddhists to be built of the site of the footprints of 4 Buddhas, and the temple has a special significance to Thai Buddhists who make pilgrimages to Wat Phra That Choeng Chum temple, and many colourful festivals are held here throughout the year. Other temples nearby which attractive tourists nearby include Phra That Narai Cheng Weng, Wat Pa Suthawat, and Wat Pu Udom Somphon.

Next read about Travel from Bangkok to Sakon Nakhon