Wat Kanma Tuyaram is open every day during daylight hours and admission is free.

Wat Kanma Tuyaram is a compact temple on the busy and narrow Mangkon Road. The Mangkon Road is a busy street full of shops and stalls and the existence of a temple in such a busy area comes as something of a surprise.

Wat Kanma Tuyaram was built in 1864 under the patronage of a wealthy local Thai-Chinese family which owned a notorious local brothel. The brothel was established by the infamous Yai Fang. His daughter carried on and developed the family business, but in an attempt to atone for her sins, and improve the family’s social standing, she used some of her ill gotten gains to build several temples in Bangkok, including Wat Kanma Tuyaram and the larger Wat Khanikaphon. Her efforts were to some degree successful as her son, Kan Sakhonwasi, was accepted into the Royal Court as an aide to King Mongkut (Rama IV). The name, Wat Kanma Tuyaram, was bestowed on the temple by the King and it means ‘Mr Kan’s mother’s temple’.

Wat Kanma Tuyaram has a prominent and highly embellished entrance gate depicting characters from Buddhist mythology. In a large niche in the outer wall there is also an important shrine to the Goddess of Mercy, Guan Yin, who is worshipped by Chinese and Vietnamese Buddhists to a greater extent than Thai Buddhists.

The principal point of architectural interest at Wat Kanma Tuyaram is, however, its chedi. The chedi at Wat Kanma Tuyaram is unusual as it is one of only two chedi in Thailand styled on the famous Dhamek Stupa in Saranath in India. Saranath is near Varanasi in India and it is the place where the Lord Buddha is believed to have given his first sermon after achieving enlightenment. 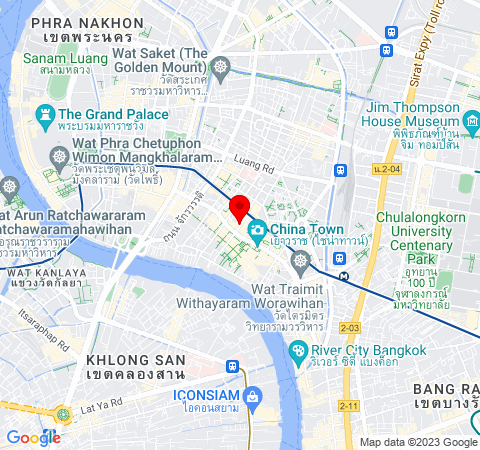