Wat Mung Muang is a highly ornate, but little visited, Buddhist temple in Chiang Rai city centre in the far north of Thailand. The temple is well worth visiting if you are in the area.

Wat Mung Muang is an old temple. Exactly how old is a mystery. The Tourist Authority of Thailand suggests it was built in the ’20th Buddhist era’, which is the 16th Century, with construction of the existing building completed in the middle of the 19th Century.

The oldest structure at most temples in Thailand is the chedi, which is a normally a robust concrete and stone structure more likely to survive hundreds of years that more complicated structures like prayer halls. The chedi at Wat Mung Muang is built in a classic Lanna style and may well therefore be 400 to 500 hundred years old.

The ordination hall at Wat Mung Muang is constructed almost entirely from cast concrete and looks as though it may date back only as far as the early 20th Century. The doors are normally locked so visitors are unilkely to be able to gain access.

Wat Mung Muang has a further temple building currently under construction. This building looks as though it is going to incorporate design elements related to Khmer and Indian Hindu temples, which is interesting but contrastingly different to the most visited and beautiful part of Wat Mung Muang, its prayer hall.

The prayer all at Wat Mung Muang is a great example of a classic Lanna style temple, and probably the best one you will find in Chiang Rai. The base of the prayer hall is concrete but the rest of the structure, except for the roof tiles, is constructed from skillfully carved and ornate decorated woodwork.

The prayer hall in Wat Mung Muang is the only temple building on the site which you can can enter. The centre piece of the interior of the prayer hall is its Buddha shrine. There are several very high quality Buddha statues, suggesting that the temple was one point a religious centre of some importance. Statues of this quality are seldom found in the country’s less important temples.

The hall is also packed full of other statues and artwork such as paintings of important Lanna era historical characters, including King Mangrai who founded Chiang Mai as the first capital of the newly created Lanna Kingdom in 1296. The quality of the paintings and other items far exceed what you would typcially find at a small provincial Buddhist temple, further reinforcing the conclusion the Wat Mung Muang must have an important temple at some forgotten point in history. 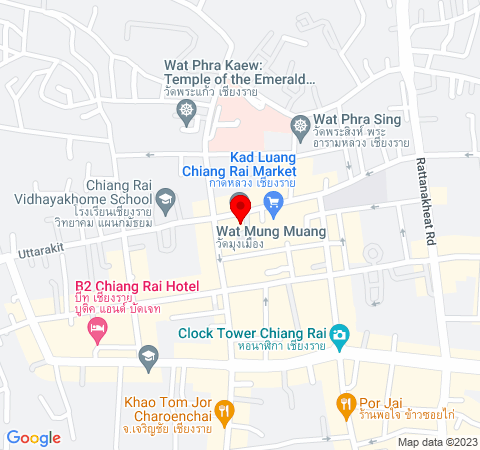