Wat Phra Kaew Don Tao is open to visitors every day from 06:00 to 18:00 and admission costs 20 THB for foreign visitors, and nothing for Thai visitors.

Having once hosted the Emerald Buddha is enough to make Wat Phra Kaew Don Tao an important temple. For this reason a special holy relic, a hair of the Lord Buddha, is kept at the temple in a magnificent 50 metre high chedi. The chedi is the oldest part of the temple.

A newer, and more surprising, addition to Wat Phra Kaew Don Tao is its Burmese style mondop with 7 tiered roof. The reason why a temple in Thailand has a Burmese style building is that it commissioned in 1909 by Burmese residents who had travelled to this part of Thailand in significant number to work in the lucrative local teak industry. At one time, there were large natural teak forests all around Lampang which attracted workers and traders from all over South East Asia to come to Lampang.

Beside the large chedi and the Burmese style pagoda, Wat Phra Kaew Don Tao also has highly ornate prayer and ordination halls. Both buildings have tiered roofs with impressively decorated gable ends. These two buildings are in the classic Lanna style found in many locations across the Northern Region of Thailand. This style that is still closely associated with the cultural identity of the Northern Thailand even though the Lanna Kingdom ceased to exist from 1909 when it’s former territories became formally incorporated in to the Kingdom of Siam.

A second famous statue associated with Wat Phra Kaew Don Tao, the Phra Kaew Don Tao after which the temple is named, has been moved to the larger and more important Wat Phra That Lampang Luang, 18.6 km to the south west of Lampang city. According to legend this statue was formed magically when a green gem stone fell from inside a watermelon, which a local woman was eating, and thereafter transformed into the Phra Kaew Don Tao. An alternative explanation of the statue’s origins is that it was made locally in the 16th Century and placed inside Wat Phra Kaew Don Tao. 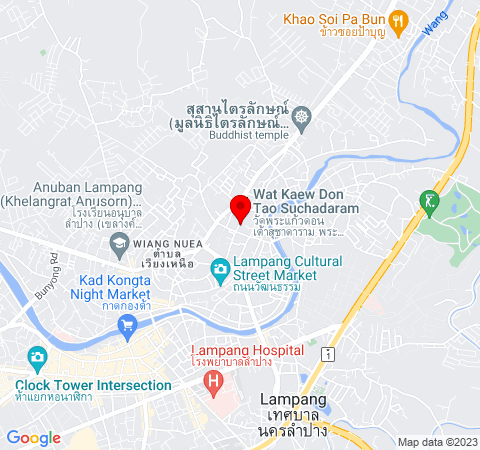 Next see Bus times from Lampang to Chiang Rai