Wat Suthat Thepwararam is a large and important Buddhist temple in the historic Rattanakosin district of Bangkok not far from other major sights such as the Grand Palace and Wat Po.

Wat Suthat Thepwararam is open to visitors daily from 09:00 to 18:00 and admission costs 40 THB for foreign visitors.

Wat Suthat Thepwararam is also sometimes known as the Temple of Giant Swing because of the 20 metre high teak structure in front of the temple. The swing, known as the Sao Ching Chaa, was erected in the late 18th Century and used in an annual competition where local men would attempt to swing 25 metres in the air to catch a bag of gold on a stick. The practice was stopped in the 1930s because of the high number of fatalities.

Construction of Wat Suthat Thepwararam began in 1807 on the under of King Rama I, and was not fully completed until 1847 during the reign of King Rama III.

The main building at Wat Suthat Thepwararam is the Viharn, or Assembly Hall, which is the tallest building of its kind in Thailand. The reason the Assembly Hall is so tall is that it was constructed to house an 8 metre tall statue, known as the Phra Si Sakyamuni, brought to Bangkok from a derelict temple in Sukhothai.

The courtyard around the Assembly Hall at Wat Suthat Thepwararam is full of statues. Many of these statues depict Chinese figures. The statues are believed to have been brought to Bangkok by Chinese merchant vessels principally as ballast to keep their ships stable before the return journey to China laden with products from Thailand.

The courtyard also has around 150 Buddha statues of various shapes, sizes and colours The statues are under a roof which covers the inner part of the wall surrounding the Assembly Hall. Each of these statues has a patron who is responsible for statue’s upkeep and many have the ashes of the patron’s relative interred under the statue.

The inside of the Assembly Hall at Wat Suthat Thepwararam is magnificently decorated with wall murals with the Phra Si Sakyamuni statue at the the far end. The murals relate to the story of the lives of the Lord Buddha, and other scenes which are believed to depict life in Bangkok during the early 18th Century.

The inside of the Ordination Hall at Wat Suthat Thepwararam is closed to visitors when the ordination ceremony is taking place, but at other times visitors are free to look inside. The hall contains another large Buddha statue at the far end, the Phra Buddha Trilokachet, which was cast in Bangkok during the reign of Rama III.

The walls of the Ordination Hall Wat Suthat Thepwararam are also covered in wall murals, this time depicting scenes from the Ramakien, which is the epic and mythological story of the creation of Thailand. 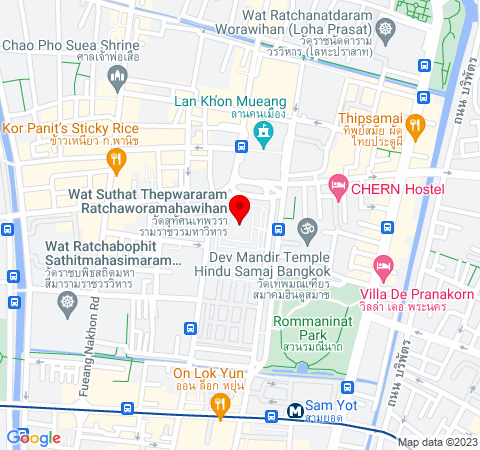